We are living in a golden age for space exploration and the world-wide interest in planetary surface exploration, with particular regard to future robotic and human missions, is rapidly increasing. Many nations can maintain robust space programs that continuously deliver a great amount of highly complex datasets. These data can be used for the production of Geological maps which provide the context for all observations and interpretations of surface and subsurface processes on any planetary body and their histories.

Up to date geological maps of planetary bodies are released on a regular basis only by the United State Geological Survey which follows a standardized production of map quadrangles. However the great amount of highly differentiated dataset from planetary missions calls for innovative non standard products and established networks of institutions and scientists all over the world devoted to geological mapping and 3d geo-models. It is high time to maximize the scientific output of planetary missions and improve the position of Europe in this context.

PLANetary MAPping project (PLANMAP) aims at providing highly informative geological maps of the three main bodies of interest for European space missions in the next decade: Mars, Mercury and the Moon. These maps will include spectral information, elemental composition, absolute ages and ground truth information derived by past and ongoing planetary missions. They will also provide the basis for subsurface 3D geological modelling, and will be disseminated using dedicated web-GIS software. 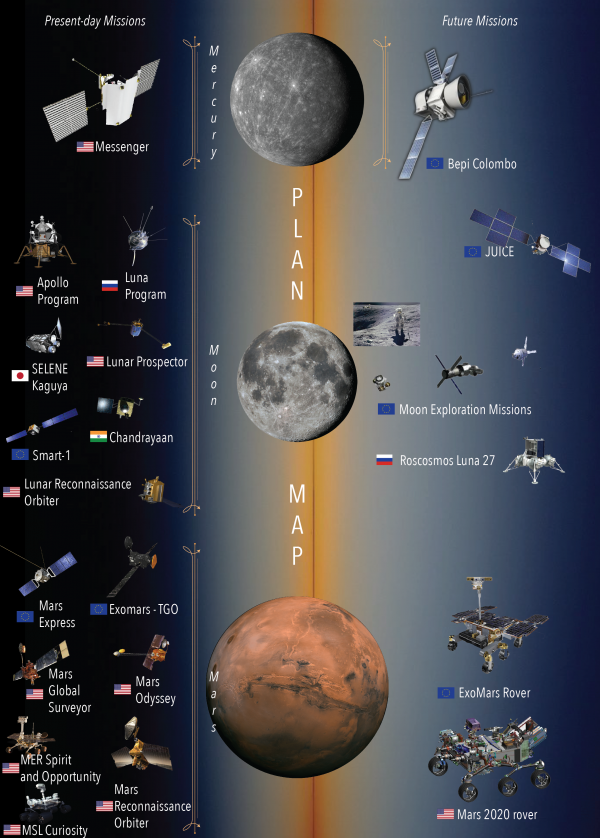 The innovative approach of PLANMAP is to integrate data from different sources (images, DTMs, spectral-cubes, chemical data, radar sounding products, in situ observation) to produce geological maps specifically dedicated to planetary exploration at different levels (orbital probes, robotics and human). The final result would be planetary geological maps that, unlike the traditional photo-interpreted ones, should be more similar in information to Earth geological maps where the geomorphological, structural, and stratigraphic characteristics are integrated with other information (lithological, compositional, and ages on Earth; colors, spectra, elemental composition, and absolute model ages on other bodies). 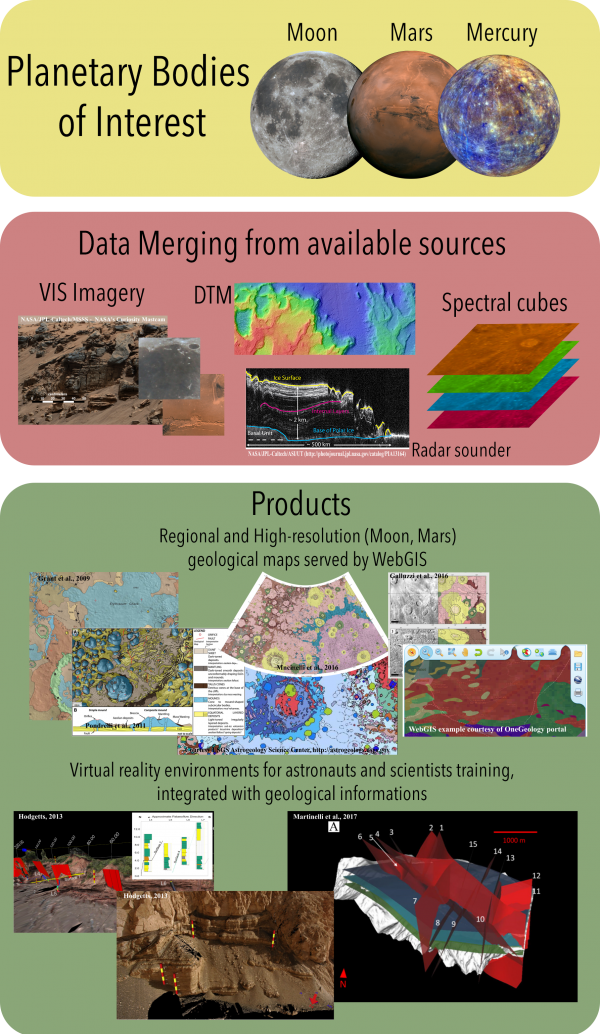 To handle the fusion of such a wide range of data, multidisciplinary collaboration among geologists, geophysicists and astrophysicists is needed and guaranteed by the PLANMAP consortium. Indeed, we have gathered leading European experts on planetary science covering the broad field of knowledge required for geological map generation in the different planetary contexts of Mars, the Moon, and Mercury.

Rather than subdividing the Working Packages (WPs) on the bases of the different planetary bodies, we have opted for WPs focused on the specific activities necessary for defining the geological mapping work-flow. 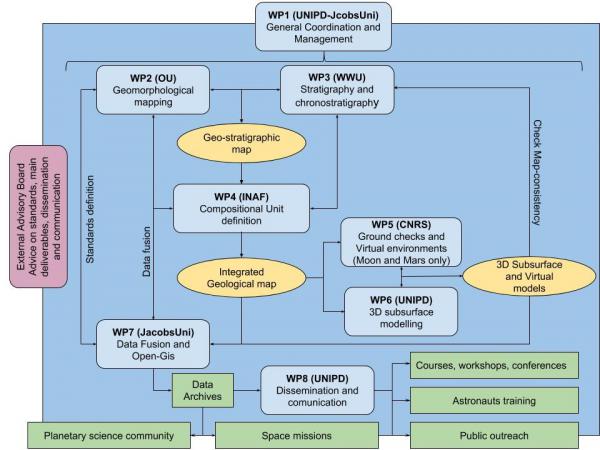 PLANMAP aims to improve the quality, quantity, and efficiency of modern planetary geologic maps by establishing procedures and creating novel products, which will have immediate impact on observation strategies of scheduled ESA space missions and on planning future ones.

In particular, PLANMAP products will help in preparing observation strategies for orbiting probes, select locations of high interest for exploration or exploitation reasons, select landing sites in scientifically interesting and safe places and characterize them, focus the strategy of exploration with rovers.

This will ensure European society can play a leadership role in exploring/exploiting planetary bodies, both scientifically and economically.

In this context, the geologic maps, the 3D geo-models, and the augmented virtual environments of PLANMAP will be used to train the next generation of planetary scientists and astronauts through companion Europlanet and ESA activities.